The Kingston was an “iron screw steamer” of 1,436 or 1,448 GRT built at Oswald Shipbuilding (Thomas Ridley Oswald, owner), Pallion, Sunderland, UK for the Commercial Steamship Company Ltd. (Mr. John Sheriff Hill, No. 32, Great St. Helens, London, managing owner). The ship was launched 16 February 1871 with a length of 78 meters, 10 meters in beam, and 6 meters in draught. The ship was Brigantine rigged with a mast located both forward and aft. She had a single deck with a 2 tiered superstructure located forward of amidships and a raised deckhouse aft, most likely for accommodations for the 25-man crew. Below decks she was built with 5 cemented bulkheads. Primary propulsion was provided by a 2-cylinder 130-HP compound steam engine (cylinders were 29 ½ & 58 ½ inches diameter respectively)by North East Marine Engine Co., Sunderland, which gave the ship a to speed of 11 knots.

Throughout the ship’s life, the Kingston operated as a coal carrier. In 1878 the ship received new boilers, also from North East Marine Engine Co., Sunderland, to replace the aging boilers which the ship was originally built with.

In 1879 the ship’s Masters are listed as being Captains Chitham and Firth. However, neither of these Masters were onboard the ship at the time of her loss.

On 28 January 1881, the Kingston departed Cardiff, England under the command of Captain Thomas Richard Cousins with a 1,210 tons of coal bound for the Port of Aden. Her draught at the time of departure was 20 feet 2 inches aft, and 18 feet 6 inches forward. This draught would have lessened during the trip south as the 530 additional tons of coal loaded in her bunkers was consumed for the fires in the boilers.

The passage from Cardiff to the Mediterranean, and then transitting the Suez Canal was made without incident, and the ship departed Suez at 0815 16 February in calm seas, cloudy skies, and a slight Northwest breeze and continued her voyage south towards Aden with engines running at full speed.

When the ship reached the Zenobia lightship at Newport Rock the ship’s course was altered to South-1/2-East and continued on this course, passing the Zafarana light at 1245 at a distance of 2.5-3 miles when the course was changed again to South-Southeast.

At 2250 the ship passed the Ashrafi Lighthouse at a distance of about 3 and a half miles. At this time, Captain Cousins, who had been on the bridge for the past 4 days, felt that the ship was “pulling” against the port helm and once again the ship’s course was altered 1/4 point to the South.

At 2245 Captain Cousins then ordered the 2nd Mate to set the foresail. The 2nd mate sent a man aloft to loosened the sail and called the forward lookout away from his post to assist in setting the sail. Once this was done, the 2nd mate and another crewman went aft to trim the yards.

At 2250, only 5 minutes after the foresail had been set, the Kingston struck the Southwest corner of Shag Rock. Soundings were taken forward and aft and an anchor was run out aft of the ship to assist in pulling the ship off of the reef. The engines were also put at full speed astern until 0200 on the 17th of February, at which time the Captain ordered the cargo jettisoned from the ship in order to lighten her. As the cargo was being thrown overboard throughout the day, another ship, the F.W. Ward arrived and offered to transport the crew of the ship to Suez. The F.W. Ward’s Master declined to assist in pulling the Kingston off of the reef. Captain Cousins declined the offer and the ship departed.

By the following morning, the 18th, approximately 60-70 tons of the ship’s cargo had been thrown overboard. During the day, another steamship, the Columbian arrived at the scene and offered to assist in pulling the Kingston off of the reef. A line was passed between the two ships and attempts were made to refloat the ship, all unsuccessful, after which the Columbian also left and continued on her voyage.

Later that evening, the Kingson started taking on water. The following day, Captain Cousins realized that the ship was lost and gave the crew permission to leave the ship. At approximately 1400 that afternoon, a passing ship, the Almora picked up 16 members of the crew. The remainder of which, along with Captain Cousins, remained onboard until approximately 1800 on 20 February when the abandoned the sinking ship in one of the ship’s launches and spent the remainder to the night in the shelter of the reef. The ship eventually slipped off the reef and sank at position 27.46.42N/33.52.36E in 17-30 meters of water.
By 1500 the following day, the men were able to make landfall on Gubal Island where they remained until the 24th when, being short of water, rowed their boat out into the channel and picked up by a passing steamship, the Strathmore, which delivered them to Suez.

At the Board of Trade Enquiry conducted on 13 April 1881, it was decided that the loss of the Kingston was as a result of “unseamanlike” conduct in regards to the navigation and safe handling of the ship. As a result, his Master’s certificate was suspended for 6-months, however, he was allowed to keep his First Mate ticket.

In the diving world of the Red Sea, this ship was known as the Sara H for a long time before she was positively identified as being the wreck of the Kingston (The name Sarah H being the name of a local divemaster many years ago).
The wreck now lies completely upright at the base of Shag Rock with the stern at approximately 17 meters and leading up to the bow area at around 5-10 meters. This area is subject to strong currents so the best way to dive this wreck is to drop in at the stern and then come around to the starboard side in the lee of the ship. The rudder and propeller are still in place and make for a good photo opportunity. Coming up and around on the starboard side, one can enter what remains of the hull. The wooden timbers which made up the decks have long since disappeared, leaving the iron skeleton of her ribs and frame, all of which have all been colonised by hard and soft corals and are absolutely stunning. The stern deck area still has the remains of the ship’s aft bollards and a few other remains of deck equipment. Swimming forward, spare propeller on the way up to the ship’s boilers which are still in place and are pretty interesting. Forward of this area there isn’t much left of the ship except scraps of iron. Lying on the bottom beside the ship are the two masts complete with crow’s nests!

When the time comes to have to leave the wreck, turn with the reef on your left shoulder and let the current carry you along until you reach the western side of the reef, which is usually calm water. Corals all along the reef and in this area are extremely amazing! 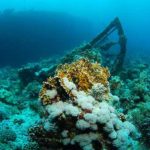